During my road trip in Slovenia, we stopped for the day in Piran and Izola before starting our return to Switzerland.

Its history is particularly rich and long and goes back to times before the Roman Empire. This past can be felt by strolling through the narrow streets of the coastal towns but also by exploring a little further inland. Although tourism has developed greatly in this region, the human atmosphere of a very welcoming Slovenian people, open to passing travellers, is noticeable.

The Slovenian coast is located 47 kilometres long between Italy and Croatia. It has also been a place of territorial importance for more than twenty years with Croatia following the break-up of ex-Yugoslavia in 1991. The maritime border between the two countries is still not entirely clear, since Slovenia has claimed the entire Gulf of Piran since its independence and is planning a corridor through Croatian territorial waters to give it access to international waters (see maps below).

However, the Croatians refused! They contest the annexation of land parts to Slovenia. Following this first conflict, several frictions will aggravate this delicate situation between the two countries, even pushing Slovenia to use its right of veto to slow down Croatia’s accession to the European Union. Nowadays, following the decision of an international arbitration tribunal in 2017, it grants Slovenia most of the bay and thus direct access to the international waters of the Adriatic Sea. Naturally (it would be too simple otherwise), the Croatians do not agree and continue to fish in the waters of the Bay of Piran.

Because it belongs to the region called Istria, the Slovenian coastline is bilingual and every street is noted in Slovenian and Italian. Thus, the 4 coastal towns are called Koper (Capodistria), Izola (Isola), Piran (Pirano) and Portorož (Portorose).

In order to get to know and discover the hidden gems of the Slovenian coastline, we decided to spend a day in Piran and Izola. We would have had the opportunity to push our exploration towards Koper or Portorož, however, these two places seemed less interesting to us, so we decided to postpone our trip for another one, as Slovenia was a real discovery.

This Slovenian town is one of the prettiest Mediterranean cities I have ever explored. With its narrow streets and colourful houses, it didn’t take much for me to get a direct feeling of the summer atmosphere, but without hordes of tourists at every corner of the streets.

The old town of Piran, in the shape of a peninsula or a point, is simply splendid and pleasant to stroll around. Nicknamed Little Venice (like so many European cities, which have either canals or buildings resembling it), it is true that I have sometimes felt like in the Serenissima at the bend of an alley. Moreover, most of the buildings on the peninsula were built during the Venetian reign over Piran (under its yoke until its decline in 1797). Centuries of Italian, Austrian, Croatian and Slovenian influences thus brought about a great ethnic and architectural diversity.

The historical centre has preserved a medieval layout with its many narrow streets (from the top of the Campanile we tried to guess the layout of these, a not so easy challenge), houses that “squeeze” together, pretty squares and churches.

Below you will find the map of the town which is in the official brochure given at the tourist office. Being a bit blurred, I am also putting it in PDF format.

We parked the car in the garage of the Arze and started our visit to the city walls from where the postcard view is grandiose. Dating from the 15th century (period between 1470 and 1533, the first rampart of the town was built around the 7th century), the panorama over the peninsula which juts out into the deep blue reinforced by the reddish roofs of the houses is absolutely magnificent. Still surrounding the city with a protective embrace, Piran is, in its almost totality, a real protected cultural monument.

We then walked down to the heart of the city in the famous Piazza Tartini, which owes its name to the 18th century Venetian violinist and composer Giuseppe Tartini, who made his hometown famous all over the world. Moreover, his statue has adorned the square since 1896. It is the ideal place to contemplate the beautiful facades of the monuments, have a drink or learn about Piran at the town hall. In the past, Piazza Tartini, now in the shape of a shell, was a small fishermen’s port, but in 1894 it was filled in and the square was born.

We continued our exploration by taking a cobbled street behind the Venetian house in Piazza Tartini to reach the church of San Giorgio, one of the city’s emblems. Situated on a small hill, it is a lovely viewpoint over the rooftops of Piran. This baroque church dates back to the 12th century and can be visited thanks to the creation of a museum. The bell tower is accessible via a stairwell and the view from its top is breathtaking.

The rest of our day was simply wandering through the narrow streets marvelling at the charm of the old town, admiring the charming marina and eating! The city is famous for its maritime gastronomy, yet we simply rested on a terrace in Piazza Tartini where I enjoyed the best gorgonzola spaghetti of my life before heading to Izola.

As the city is entirely pedestrian, to get there by car, you have to park at one of the two large car parks in Piran, one at the top of the city and the other towards the old town (but more expensive!).

We parked at the Arze car park located at the top of Piran. Having read that a fine set by the mayor of Piran, Peter Bossman, is 200€ if you park in the wrong place, I advise you not to take any risks and to pay for the car park.  Parking prices are here, they are not very expensive compared to those set in Switzerland.

The city is easily accessible by bus from Trieste, Ljubljana and Croatia.

Naturally, the sea route is also promoted, however, ferries cannot come to the marina in Piran but dock at the marina in Koper, Izola or Portorož.

Less famous than its neighbour Piran, Izola is a charming village where its gentle way of life is perceived more humanely than in Piran, which is more touristic. A town of fishermen and workers compared to its coastal counterparts, it is more authentic. It is a mosaic of tradition, history and architecture, due in particular to the same influences as Piran but with a more amplified Italian influence.

We spent an hour strolling through its narrow, charming streets. However, being smaller than Piran, when we arrive at the headland of Izola, in this summer period, locals and tourists gather to bathe; which does not leave the opportunity to take a leisurely stroll or to enjoy the seaside.

Although we didn’t stay there because we had a long drive ahead of us, in the evenings the town is dressed up in its most beautiful artifices during the summer weekends and many events are organised. The terraces of the restaurants are crowded and the smell of delicious seafood can be smelled (as in the port of Piran rather during the day). If you are looking for a festive atmosphere, but more authentic and warm than big seaside resorts, Izola is the perfect place.

We parked in the car park between the marina and the city. The rates are the same as in Piran, however the first hour is free.

The city is also easily accessible by bus from Trieste, Ljubljana and Croatia.

Ah, I almost forgot! The beaches! Well, on the Slovenian coast you can’t really talk about beaches…

Indeed, there are no sandy beaches in Slovenia. In both villages, you can swim directly from the rocks or by putting your things on the small concrete areas provided for this purpose. Having explored both towns, I would recommend Piran for swimming rather than Izola because of the crowds. In Piran, we can take a leisurely stroll along the sea, while in Izola every nook and cranny is full of cloths or sunbathing bodies.

Both cities are well worth a day or even a few days. In the summer, of course, crowds are everywhere as it is also the closest resort for Slovenians living in the capital or inland.

I think I will go back once, but at a less hot time of the year and above all, because I would like to explore as far as the Croatian coast which, apart from Dubrovnik, is unknown to me. 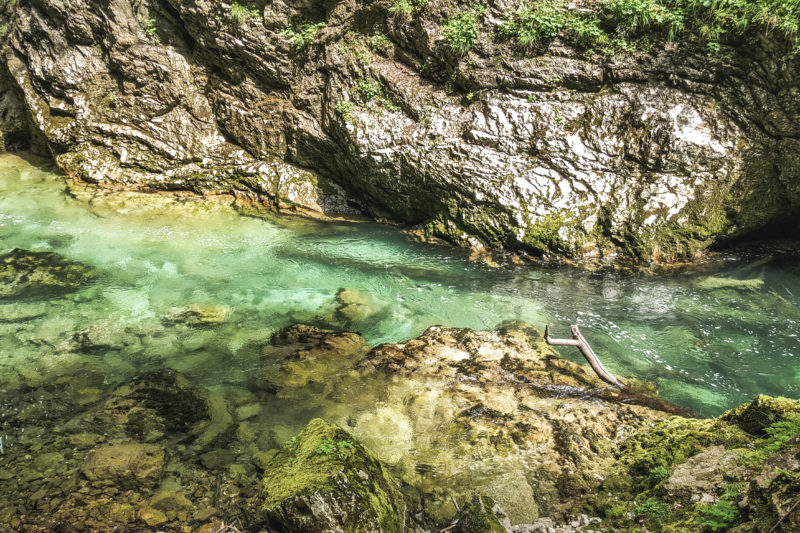 The Vintgar gorge, between limpidity and hordes of tourists 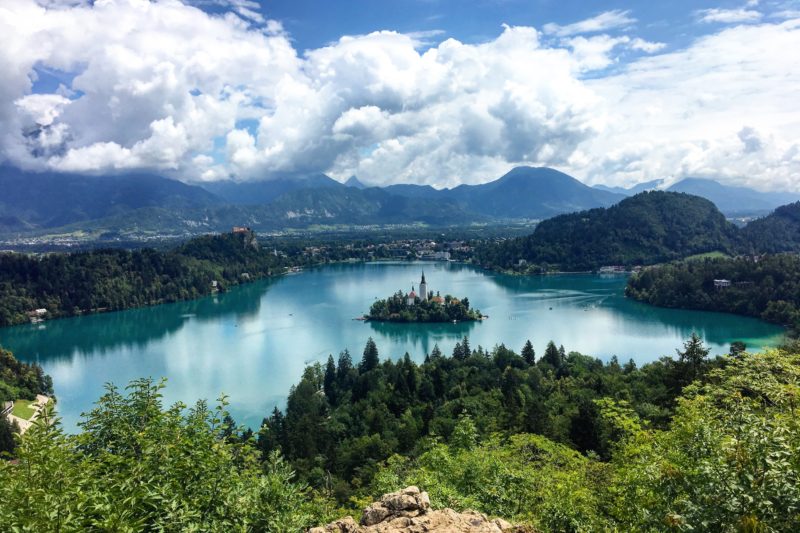