Moravia? Absolutely unknown to the battalion would you tell me. And yet, it is a magnificent region of the Czech Republic that deserves to leave the vibrant Prague to make a diversion for a few days.

Spending two days in Bratislava, I seized the opportunity to discover another aspect of the Czech Republic since Moravia is located on the Slovakian border. It also interested me to confront these two countries which, during a good part of the 20th century, were grouped into one nation: Czechoslovakia! The history of these two countries is absolutely captivating, especially because of its Austro-Hungarian past and then, of course, the Second World War and the consequences that followed (Warsaw Pact).

To better understand the situation of the country, the Czech Republic is formed by the former provinces of Bohemia and Moravia which made up the Kingdom of Bohemia and the Margraviate of Moravia. They were part of the Holy Roman Germanic Empire and then of the Austro-Hungarian Empire before the First World War.

As a result, we only had two days in the Czech Republic to soak up the Moravian region, which is why we chose to stay in Brno and then spend one day exploring Olomouc. These were names of cities that I had never heard the slightest hint of, but which resonated completely off the tourist trail, which in my opinion gave me a better understanding of the country, in a more authentic way.

Naturally, I would have liked to have had the chance to spend a few more days to explore other villages full of history and Czech character, such as Kroměříž or Lednice, however, in such a short time, these two places already seemed to us suitable for discovering the surroundings.

Brno, the second largest city in the country, is not really beautiful at first glance, especially if the weather is cloudy. Yet after a day strolling around its old town, authentically Czech, I was charmed.

The South Moravian metropolis, founded around 1243, is full of life and brings together culture, history and nightlife without the crowds of tourists who pop up, selfie-stick in hand, from every corner in Prague (of course, it was a sarcastic comment: buses full of Asians are naturally passing by as in any place that is even a little bit pretty).

Defining itself as a student and scientific city, its interest is mainly concentrated in the Old Town, which is full of buildings, strongly marked by history, rich in a wide variety of styles, but also slightly set back from the city centre, with the famous Tugendhat villa in the functionalist style, listed as a UNESCO World Heritage Site in 2001. Brno is also sometimes called the “Manchester of the Czech Republic” because of its industrial dynamism.

No sooner had I disembarked at the station than I was fascinated by its appearance worthy of a stop on the Orient Express and then, on arriving at the “station square”, I felt as if I had gone back in time a few decades. I had the same effect, two days earlier, when the train from Vienna dropped us off in Bratislava. Although I wasn’t even at the embryonic stage at that time, I always had a fairly clear idea of what Eastern Europe must have looked like, mainly because of my great interest in East Berlin, the Soviet Union and all the historical richness of the 20th century.

So I feel as if I am going back twenty-five years, just after the country’s independence from Czechoslovakia and the Eastern bloc (invasion by the Warsaw Pact in 1968). A prospect full of promise and freedom. However, there is still a long way to go before the country is able to emerge from this influence and deep-rooted culture. Even our hotel, located right next to the railway station, the Grandhotel Brno, although built-in 1870, seems to have been frozen since the former Soviet glory days with its structure and austere totalitarian atmosphere.

At first glance, I feel the people are closed, cold and unwilling to share or welcome strangers. Various experiences and situations will make me change my mind or reinforce this feeling since of course this also depends on the energy I transmit when making contact.

NOT TO BE MISSED:

Simply wander around the old Czech town and soak up its lively, youthful atmosphere. Don’t forget to venture to the old town hall, Stará Radnice, built-in 1240, and pass under the “Brno dragon”, the emblem of the city, which is nothing more and nothing less than a simple statue of a crocodile. If you like to explore, as I do, the towers which also allow a 360-degree panorama, the tower of the old town hall will suit you.

On the road to Špilberk Castle you will come across the Cathedral of St. Peter and Paul (Katedrála sv. Petra a Pavla), which dominates the city.  Illustrated on the currency of 10 Koruna, it is one of the most important places in the country.  Knowing that the Czech Republic is one of the least religious countries in the world (influence of the communists who, as early as 1948, confiscated all the properties of the Church, of Catholic confession), I always find it interesting that the nation is full of churches and holy places despite the little interest in this subject of the local population nowadays.

For the little story (thanks to the anecdotes of Le Routard guide), don’t rely on the cathedral because when 11am comes, the 12 strokes of noon resound. This goes back to the siege of Brno by the Swedes in 1645 (during the Thirty Years’ War), when the Swedish general-in-chief, who was fed up with the siege which was dragging on and on, decided that his troops would leave at 12 noon during the last attack if the city was not conquered. Therefore, at 11 o’clock, when they sent a cannonball that hit one of the towers of the cathedral, which would burn down completely because of this, the priest had the idea of abusing these assailants by sounding the 12 noon shots. As a result of this subterfuge, the Swedes, keeping their promise, withdrew and Brno was saved. From then on, if it is noon, it may only be 11 o’clock…

I would also have liked to visit Špilberk Castle, perched on a hill, whose reputation as a Gestapo torture site is no longer to be feared. I simply ventured to the top to enjoy the beautiful view of Brno, but there was not enough time to visit the castle and fortress, which tells the dark history of the place.

In the surrounding area, Lake Brno offers a great escape into nature. And if you are fond of the great battles that raged in Europe, the site of Austerlitz is just a few kilometres away.

Considered to be the prettiest city in the country after Prague, I wanted to see with my own eyes this city with a very Slavic name. Nicknamed “the pearl on the green cushion”, I didn’t really manage to understand its meaning. Olomouc boasts a very large and well-preserved, peaceful historic centre, which includes an unimaginable number of monuments, fountains, palaces and churches (about 28!), centred on two imposing squares, Horní náměstí (high square) and Dolní náměstí (low square). It is mainly around these that we wandered to soak up the atmosphere.

I must confess that although it was the beginning of spring, it was a cold Siberian weather in the city, which encouraged us rather to warm up in a nice café than to stroll around.

Having seen many beautiful pictures of the high square, I clearly expected a more spectacular panorama, mainly in terms of architecture. However, once again, the weather was not in our favour and the renovations to the town hall and the Easter party right next door took the place’s cachet away.

Of course, they are still beautiful buildings and I had a real crush on the vintage blue building that happens to be a pharmacy. It was in Olomouc, by the way, that the young Wolfgang Amadeus Mozart, suffering from smallpox, completed his 6th Symphony in F major at the age of 11!

NOT TO BE MISSED :

On Olomouc’s main square you will be charmed by the beautiful town hall with its famous astronomical clock. Unfortunately, it was being renovated during my visit, but without the scaffolding, the building is certainly prestigious.

But what is most astonishing on the high square is undoubtedly this rough and blackened column which does not breathe beauty. Despite this, the column of the Most Holy Trinity is a UNESCO World Heritage Site, as it is the largest group of Baroque statues in Central Europe.

From here, venture into the network of cobbled streets surrounding the two squares. There you will discover beautiful houses in bright, shimmering colours, but also many small cafés that are well worth a stop.

You can reach Olomouc by train from Brno in one hour. You can find information about timetables and reservations here. However, having discounts thanks to my father’s work, I always go to the station ticket office to get a ticket, which may be easier to get information about the chosen place.

We also came from Bratislava by train. It is a frequent connection between Brno and the Slovak capital.

In the cities, we travelled mainly on foot or by tram. It is a convenient and cheap means of transport.

Walking through these two cities allows you to experience Czech daily life in a much more authentic way than it could be in the capital. By the way, while walking around, I was just wondering what was the purpose of a sort of stick braided with a nice coloured ribbon, which most parents held in the street. Imagining myself more as a sort of “Bogeyman” than as a simple toy, I later learned that it was the object of an Easter tradition in the Czech Republic.

Although traditional Czech costumes are only worn during festivities, Czechs remain attached to their traditional festivals. Most of them are a mixture of pagan and Christian elements and even if they are not practising much, they enjoy celebrating them.

For this reason, Easter is very important in the country, and several customs enliven it from Good Friday to Easter Monday. For example, the object mentioned above is a long stick woven from fresh wicker strands used by little boys to “whip” young girls to give them strength and vitality (hum…). The girls take revenge by throwing buckets of water at them. (and one is surprised at the domestic violence with this kind of tradition). An integral part of folklore, this pagan tradition, named Pomlázka, is linked to fertility and springtime renewal and was even encouraged by the communists.

*this article has been written in 2018

Apart from the typical tourist trails, this region brings renewal to the Czech Republic and allows a better understanding of the country and its customs. It also gave me a vague idea of the political climate that will emerge in the country in 2018. Pro-European a few years earlier, the country is taking a more conservative turn and above all less open to immigration, which awakens in the Czech people a great deal of mistrust towards the EU, which has nevertheless brought them a lot in the 2000s. Indeed, mistrust is a feeling that is a little bit felt but which of course does not extend to the whole country. We will have to see in the coming years how Milos Zeman’s presidency goes, since he was elected for a second term in January 2018, and what he will bring to this beautiful country. Knowing that he actively supported Trump’s candidacy and personality, this does not leave me with great hopes! 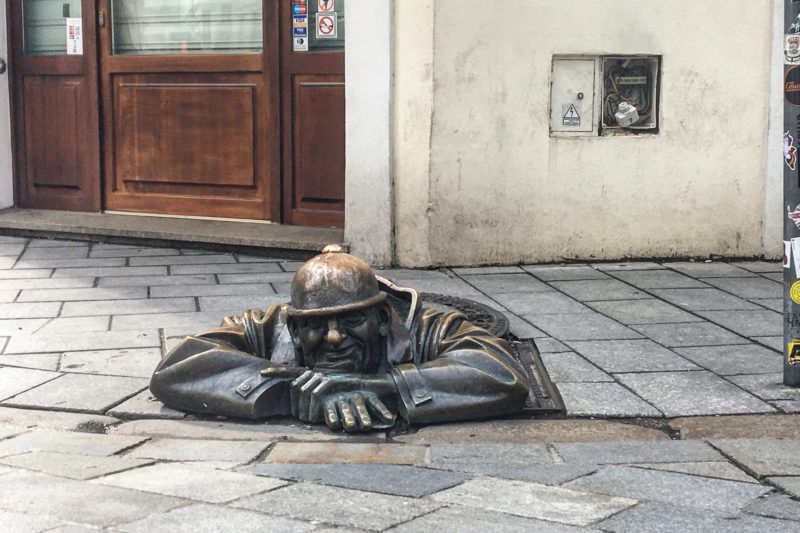